You are here: Home / About Judge Jordan 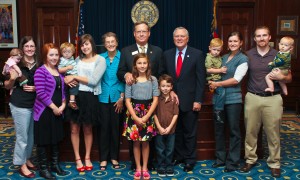 Judge Jordan is the Probate Judge of Forsyth County, Georgia.

Judge Jordan is a member of the Board of Trustees of the Institute of Continuing Judicial Education at the University of Georgia. At present, he is serving as Secretary of the Board. He also is a member of a special committee charting a certification program for Probate Court Judges by the Carl Vinson Institute of Government at the University of Georgia.

Also in 2011, he was appointed by Governor Nathan Deal to the Board of Commissioners of the Judges of the Probate Courts Retirement Fund of Georgia as the Governor’s appointee on this Board.

He served on the Chief Justice’s Commission on Records Retention, and now serves on the Executive Committee of the Office of Dispute Resolution, Ninth Judicial Administrative District. Judge Jordan has served on the Judicial Council of Georgia which is an administrative arm of the Supreme Court of Georgia. He also served on the Board of Directors, Constitutional Officers Association of Georgia.

Judge Jordan practiced law in Forsyth County from 1975 until his election as Probate Judge in 2004, concentrating in later years in estate planning, wills, estates, and probate. He is a member of the bars of the State and Federal Courts in Georgia, and has been an Attorney and Counsellor of the Supreme Court of the United States since 1979. He served as County Administrator and County Guardian/Conservator for more than 15 years prior to his election. He was County Attorney during the decade 1975 to 1985. He also served as Special Deputy Attorney General for the State of Georgia for most of his private practice career.

Recent publications by Judge Jordan include several case law updates published in The Gavel, the Probate Judges’ magazine; and, co-authoring Duties and Responsibilities of Personal Representatives of Decedents’ Estates in Georgia, a booklet published jointly by the Georgia Council of Probate Court Judges and the Fiduciary Law Section of the State Bar of Georgia in 2007.

He has taught several instructional segments for the Institute of Continuing Judicial Education (ICJE) and is a member of the National College of Probate Judges. He has presented programs to attorneys, such as a February, 2008, Institute of Continuing Legal Education (ICLE)  television program on Elder Law broadcast statewide over the Georgia Public Broadcasting system to attorneys around the State.

“Thank You” Forsyth County for 45+ Years on the Square